By Soundside Alliance February 17, 2021 | Relocate and Expand, Workforce and Education

The Seattle Southside Regional Tourism Authority (RTA) is responsible for marketing and promoting businesses serving visitors to SeaTac, Tukwila, and Des Moines. Since its inception in 2015, the RTA has developed numerous successful marketing campaigns designed to drive customers to local businesses. In response to the challenges presented by the 2020 pandemic, the RTA launched a collaborative marketing campaign imploring locals to “do something” to support businesses in their own community.

Amid strict government restrictions at the state level, Seattle Southside RTA formed a partnership with Visit Seattle to create a campaign focused on driving traffic to businesses throughout King County. The “Do Something” campaign was launched to implore locals to do their part to support nearby businesses while respecting government restrictions and safety protocols. As soon as the press release announcing the campaign was disseminated, the combined forces of Visit Seattle and Seattle Southside RTA worked together to generate a multi-faceted media blitz.

The campaign was highlighted on several local news stations throughout the Greater Seattle Area. The VS/RTA teams gave interviews and provided reporters with relevant information for stories on local news and lifestyle programs. Businesses like Medzo Gelato and Seattle Chocolate were prominently featured in these segments.

The teams created the unique hashtag #DoSomethingNearby to promote the campaign on social media. The hashtag also worked to track coverage and social media mentions by influencers and online publications. In addition, the RTA created a viral, “takeout bingo” game to boost engagement, and further encourage residents to visit restaurants in South King County. Local eateries like the Des Moines Dog House and Masae’s Teriyaki were highlighted in the bingo game and several social media posts. 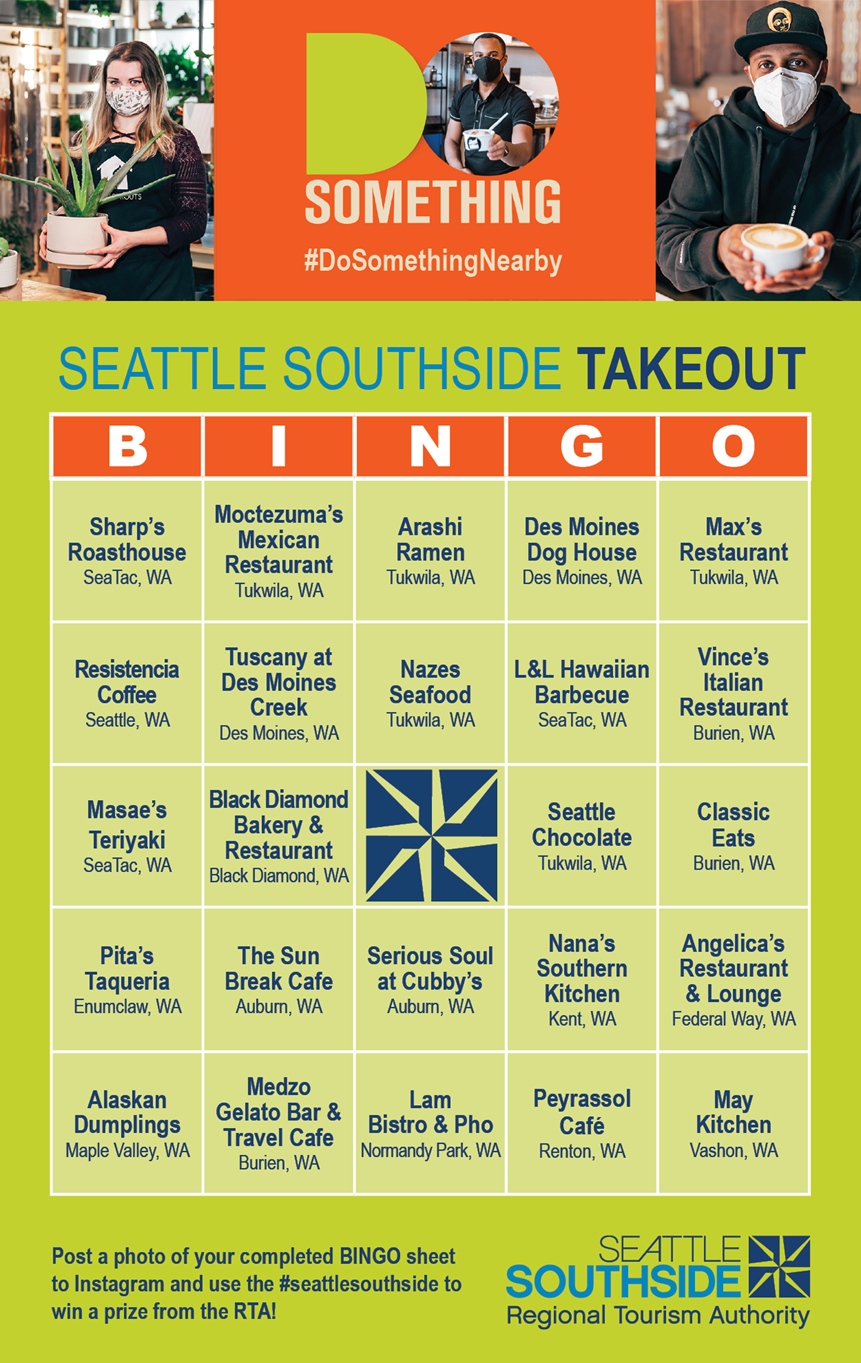 The teams created dozens of digital, print, television, and radio ads highlighting small businesses, who otherwise would not have had a budget for such promotions. The ads went live everywhere from commercials during live sports events, to physical billboards along busy highways, to online newspaper advertorials. These ads resulted in millions of media impressions and featured individual businesses such as The Quarterdeck in Des Moines.

The RTA and Visit Seattle worked with dozens of high-end influencers and local celebrities to promote the campaign and drive their respective audiences to local businesses. From Seattle-area foodies to mommy bloggers, to legendary former Seattle Seahawks, influencers helped the campaign organically reach hundreds of thousands of active social media users. Businesses like Spice Bridge were heavily promoted by these influencers.

Businesses in Seattle Southside and the neighboring communities throughout South King County benefit from the dedicated marketing and promotional efforts of the Seattle Southside Regional Tourism Authority. The “Do Something” campaign worked to drive customers to small businesses when they needed it most. Before, during, and long after the pandemic, the RTA will continue to provide their regional business partners with high-quality marketing and promotional opportunities for years to come.