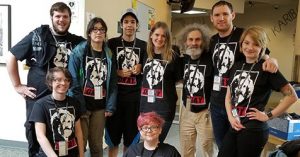 Computer Information Systems students designed the corporate computer network that was used during an international cyber competition, created and hosted by Highline College.

It’s rare to have not heard about a recent data breach or company hack, exposing thousands of employees’ and customers’ private information, during this digital information age we live in. That’s why it’s important now more than ever that corporations prioritize cybersecurity. Students from around the world recently got a taste of what it takes to be on the defense of such a scenario.

Students from The Evergreen State College, Utah Valley University, Namibia University of Science and Technology, University of Namibia, and Lingua College all participate on the defensive Blue Team.

For months, Highline College students studying for their AAS in Digital Forensics and Investigations, Network Security Engineering, and the BAS in Cybersecurity and Forensics worked to build a virtual company network that Blue Teams from around the world were responsible for securing during a simulated cyber-attack, launched and orchestrated by several pods within the Red Team. Penetration testers from the Washington National Guard, Air National Guard, and other corporations, as well as those who work in incident response teams, make up the Red Team.

But instead of winning first, second or third place, teams compete for who is “most collaborative,” “most professional,” who has the “best inject score” and a “Red Team award,” which honors the best hacker team.

“It’s less about winning and more about helping each other,” said Amelia Phillips, the program lead for Highline’s applied bachelor’s degree program in Cybersecurity and Forensics.

Phillips explained computer information systems terms and lingo are often different in other countries despite the prevalent use of Windows and Linux worldwide, so having an international invitational encourages students to work on their communication skills on a global scale.

“We want our students to get more exposure to different cultures online and have more collaboration,” she said, adding that she hopes they stay in touch after the invitational and form professional connections.

Since the invitational first began in 2017, it’s evolved quite a bit, according to Phillips. Instead of bringing international students and faculty to Highline College and hosting the networks on Highline’s infrastructure, organizers encourage countries to be “host venues” for their local colleges and all teams are connected to the competition networks on the cloud via Amazon Web Services. Also, organizers have been able to send a volunteer or two to one of those host venues to provide technical support. This year, that volunteer was Ryan Beckstead, a professor at Utah State University, who will go to Namibia. Phillips said this was made possible by recent a $10,000 sponsorship from Redmond-based Microsoft.

In fact, despite a $56,000 National Science Foundation grant, which was awarded in 2017 and expired at the end of August, Phillips said a future goal is to put a heavier emphasis on securing sponsorships to allow for more international travel. In the ICCDI’s first year, CyberWatch West gave $5,000 to the event.

Highline College earned designation as a National Center of Academic Excellence in Information Assurance 2-Year Education (CAE2Y) from the National Security Agency and the Department of Homeland Security in 2013. The CAE2Y designation is awarded to community colleges that have established a high-quality cybersecurity program and have mapped their courses to the current national standards of the Committee on National Security Systems.

Being a CAE2Y institution gives Highline unique standing since fewer than 100 of the nation’s 1,100 two-year colleges have achieved the designation.

This blog article was written by  the Highline College Communications Department